***This post is stickied. Scroll down for newer posts***

Here’s what you have to do to enter:

This Contest is international!

You have until Saturday December 6th at 8:00pm ET to enter.

All comments will be numbered and the winner will be picked using Random.org

The Outlander mid-season finale Episode #108: BOTH SIDES NOW showcases quite a bit of Frank Randall’s character. While it’s fun exploring his dark side in the show, I’m sticking with Jamie’s top looks this week. If you are a friend of Frank, I suggest you check out my review which has plenty of pictures of good guy gone bad then good again.

Last week’s steamy episode, THE WEDDING, focused on Claire (Caitriona Balfe) and Jamie (Sam Heughan) in the honeymoon suite and church. We were awarded several perfectly framed shots of both of them.

This week, I was challenged by the night-time shoots and awkward camera angles in a few scenes. But I managed to find some gems to share with you all. I hope you enjoy Jamie’s Top 30 Looks for Episode #108: BOTH SIDES NOW

#30: Jamie’s Promise Me Face – Jamie wants the producers to…

Before I begin, I have to warn you – given the hotness of the latest episode, I decided to write my captions accordingly. While I strive to be respectful of the actors, we’re all here to have a little fun. So in advance, I apologize to anyone I may offend. Now, down to business

As I state in my review, Outlander Episode #107: THE WEDDING is blazing hot. Jamie (Sam Heughan) and Claire (Caitriona Balfe) sizzle together even when they aren’t touching. As the show progresses, the heat factor also increases.

Due to popular request, I turned my Top 30 Looks into a Top 40. Yes, I know 50 is better than 40 and 100 is better than 50, but I don’t think you’ll be disappointed with the selections I made this week. I’m eager to hear from you regarding my cream of the crops. Because I was unable to limit my…

For an in-depth recap of this episode, please read: A True Fan’s Review of Outlander Episode #106: THE GARRISON COMMANDER

Outlander Ep106 takes a pivotal step for most of the main characters in the story, including absent Frank. He’s still stuck in the 20th Century without his wife, Claire (Caitriona Balfe), and is not invited to her second wedding to the irresistible James Alexander Malcolm MacKenzie Fraser (Sam Heughan).

What’s worse, it’s his own six-times great-grandfather who is driving her into his well-built chest and protective arms. Jamie is sworn to use his body by whatever means to satisfy Claire’s safety requirements. Fortunately, his duties to ensure her safety include lots of sex. And now, I’ve forgotten my point . . . oh, yeah.

Captain Jonathan Wolverton Randall, Esquire, aka Black Jack (Tobias Menzies) is front and center in this episode. So, I thought I’d do something a little different this week…

As I state in my review, Outlander Episode #105: RENT is very dark. But there is also much sparkage lighting up the screen – not all of it romantic. That’s okay. We want to see all the characters shine, especially the “sweet lad” Jamie (Sam Heughan) – as Dougal refers to him.

Outside the dank walls of Castle Leoch, everyone seems to come alive. It’s impossible not to be affected by the verdant air and sweeping landscapes of Scotland.

Dougal (Graham McTavish) is chipper, despite his constant mistrust of Claire. Ned Gowan (Bill Paterson) is his own breath of fresh air, despite his asthma. Angus (Stephen Walters) is still grouchy, despite everyone else’s laid back attitude. Claire (Caitriona Balfe) is feistier than ever but finds herself sympathizing with the MacKenzies, despite her captivity.

Outlander Episode #104: THE GATHERING presented an array of dramatic looks based on superb performances by the entire cast. The character arc for Jamie Fraser (Sam Heughan) delivered him into his full-fledged manhood.

While I very much enjoyed his lovey-dovey looks from THE WAY OUT, his soul-baring looks from CASTLE LEOCH, and his bloody-sexy looks from SASSENACH, I was astounded by his courageous and heart-felt looks in THE GATHERING.

As I state in my review, this is my favorite episode thus far because it focuses on the intricacies of the plot while advancing Jamie and Claire’s (Caitriona Balfe) relationship in a way that’s not obvious. Jamie and Claire have been on different paths since they first met, but the night of the Gathering brings them together in a way neither of them expected.

Here is my list of Jamie’s Top 30 Looks for THE GATHERING. As predicted…

Sam Heughan may be considered the sexiest man on television this summer, but Jamie Fraser has proven himself the sexiest man of the 18th Century. With his red locks, searing blue eyes, innocent smile, broad shoulders and Gàidhlig tongue-rolling r’s – he’s hot, hot, hot.

But can we stop objectifying him for one minute, ladies? Really. Let’s not forget, he’s educated and a master of foreign tongues, er, languages – including Scots, Gàidhlig, English (because there is a difference, ye ken?), French, Greek, Latin, a little Chinese, and a mishmash of Native American. I’m sure he picked up on Spanish, Italian, Hebrew, and Prussian at some point, as well.

He knows the bible like the back of his hand, has a mind for military strategy, is wise beyond his years, and has the steel fortitude of a nun.

Okay, back to objectification. You’re not here to read about Jamie’s head for figures. You’re hear to…

Two Outlander episodes down, fourteen to go. The wait for the series to begin was torturous – not Black Jack Randall torturous, but bad enough. As the season progresses, I suspect we’ll wish time would fly by slower, but not until after Episode #107: THE WEDDING, of course!

Hm. There might be quite a few interesting looks to countdown from that particular episode. Until then, let’s concentrate on the several melt-you-to-the-core looks we received from Jamie Fraser (Sam Heughan) during CASTLE LEOCH. Well, really . . . Claire was on the receiving end, but we all projected ourselves, didn’t we?

Below, I humbly submit my Top 30 Looks for Jamie Fraser from Episode #102. This was a tough one, ladies and lads. It was jam packed with searing, soulful, teasing, dramatic and cocky looks from our favorite son of Scotland. I’m more than happy to hear your feedback if I missed any of…

The Outlander television series, based on the novel by Diana Gabaldon, is finally underway. While we toil away the hours waiting for Episode #102: CASTLE LEOCH (airing on Starz 16 August in the U.S.), I thought I’d have a little more fun with Episode #101: SASSENACH.

And so, here’s my Top 30 Countdown of Jamie Fraser’s (Sam Heughan) best looks in the show. As his character is introduced half-way through, I had fewer scenes to select from than I will in future episodes – but what a selection we were given! Read on to see if you agree or disagree with me. As usual, it’s all in good fun. 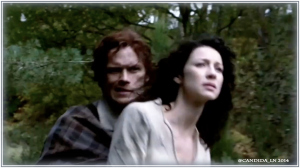 With the Outlander mid-season slump – aka #Droughtlander – in full swing, I thought I’d take the time to revisit a few of Jamie’s most awkward moments so far this season. The poor lad’s had quite a few, most all of them humorous due to Diana Gabaldon‘s impeccable writing, Ron Moore‘s talented adaptation skills, and Sam Heughan‘s brilliant acting. Never to be excluded is the lovely and equally brilliant  Caitriona Balfe, who as Claire never lets Jamie get away with anything.

Presented below are my favorite Jamie’s Top 30 Awkward Moments from Outlander Season 1 Part 1. As usual, I’ve selected a range from all 8 episodes as I’m sure you’ll recognize. And as Outlander is a drama, I decided to start with the darkest scenes first.

Watch out for SPOILERS, especially those of you who’ve not yet read the novel(s).